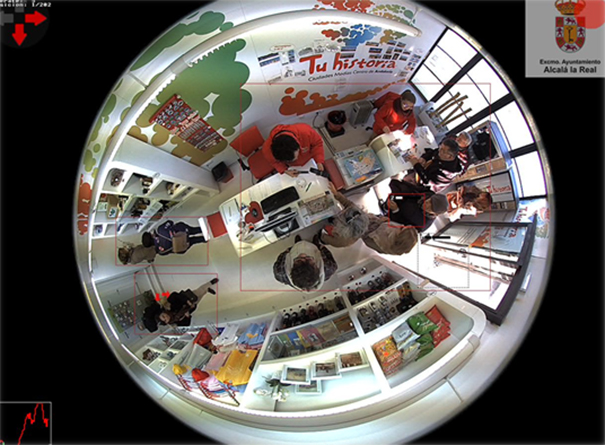 In six points of the municipality have been installed 13 high-resolution IP cameras Mobotix With 11 infrared spotlights, connected to a recording center located in Local Police.

The City Council of Alcalá la Real (Jaén) promotes the technological modernization of the municipality as a tourist destination through the development of a series of actions based on information and communication technologies. With this, looking for a safer city, So what Local Police can have real-time access, with simultaneous vision, of traffic, on the axes and main points of the area.

As the basis of the project, and hand in hand with IP Life, official distributor of Mobotix, a system for traffic control has been implemented in the most tourist and commercial axes. Six points of the municipality have 13 high-resolution IP cameras with 11 infrared spotlights, connected to a recording center located in Local Police. With the improvement, a posteriori, traffic control has been included, the industrial axes and entrances/exits of the municipality.

Once underway, regardless of the previous project, and knowing the functionality of Mobotix smart cameras, access control needs identified. Cameras have been installed in the Fortress of La Mota, in three tourist houses in the neighborhood of Las Cruces and two in El Silo.

In addition, in a timely manner, with the pandemic, cameras were also used to control capacity, such as for the counting of entrances and exits of the fairgrounds during the San Mateo Fair in September 2021.

"We must highlight the involvement and accompaniment of Vida IP in the project, as well as their professionalism and knowledge of the solution to be implemented", Designates Lola Ramirez, head of the IT department of the City council of Alcalá la Real.

The duration of the initial project of smart city, maintenance included, has been five years. Finalized, the City Council continues to rely on Mobotix technology, working with the cameras and keeping them out of the project.

Benefits for the consistory

Thanks to Mobotix security cameras, Local Police and Civil Guard have been allowed to solve traffic accidents and some recordings have been used in the courts. "It is anecdotal the comment of a judge to whom we sent a recording that said that with that he no longer needed witnesses", says Ramírez.

Also, traffic control through the security system with cameras has improved and facilitated operations from the City Council. In fact, from what was initially contemplated to the present, due to the success of the solution, the number of cameras installed has been increased.

"Mobotix technology provides us with integrated functionalities, such as license plate reading, something indispensable for the project we have undertaken. In addition, it is a very versatile service that makes it easier for us to count people, motion detection or heat maps, to highlight some of the functionalities", Indicates Inma Mudarra, Councilor for Digital Government and Transparency of the City of Alcalá la Real, at the time of commissioning.

The mayor stresses that "all these improvements are steps in advance of a modern administration, close to the citizen, adapted to the digital age, that comes to strengthen the citizen security of our municipality, while facilitating more comprehensive and efficient resourcing".