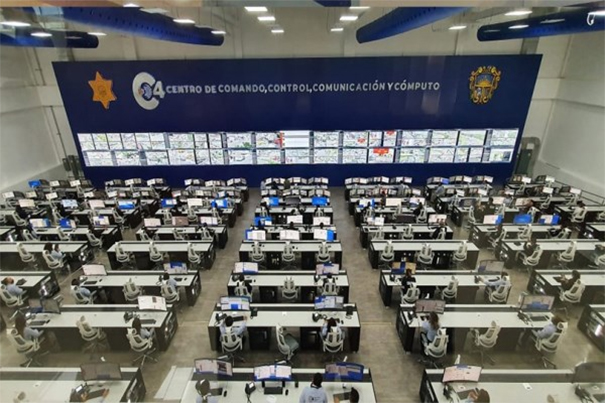 In the new control center of the Mexican city of Querétaro, in the main surveillance room, an LCD videowall has been installed ship UniSee 500 and two smaller ones in crisis and meetings.

To continue its reputation as the safest city in Mexico, Querétaro has invested in a new C4 Control Center that allows it to be prepared to respond to any crisis. These facilities are equipped with the LCD videowall platform UniSee Boat 500 and network visualization solutions that allow monitoring of urban security cameras.

In the heart of the cultural and historical area of central Mexico is the city of Santiago de Querétaro, whose historic center has been declared UNESCO World Heritage Site. It also has restaurants, coffees, markets and shops.

Queretaro has long been considered one of the safest cities in the country. However, although the crime rate is still quite low, has increased in recent years.

Taking a proactive approach, its leaders have invested in new infrastructure, equipment and technology, necessary to guarantee the well-being of its inhabitants.

This investment included a thousand video surveillance cameras, 200 citizen alert buttons – placed at points such as schools, gardens and squares- and one hundred license plate recognition cameras. It also included a building of 8.500 square meters to house a new C4 Center (Command, Control, Communication and Computing), which includes a real-time moitorization system for all video surveillance in Querétaro.

The ambitious plan aimed to monitor signals from more than 2.350 surveillance cameras throughout the city, The 24 hours of the day. To do this, precisaban de un gran videowall en la sala de vigilancia principal, as well as two smaller ones that have been placed in a crisis room and a meeting room. They also required a high-quality video display and the possibility of communicating between the different video walls..

Queretaro required a display technology that could keep its quality running 24/7. To respond to your requirements, chose the LCD solution Barco UniSee 500, which has a shelf life of 100.000 hours in mode 24/7, which is superior to that of many other products on the market.

Thanks to its technology NoGap, UniSee is practically imperceptible. This allows Queretaro operators to monitor their critical information in real time, without the annoying seams and without any loss of information.

A total of three videowalls were installed in its C4 Center: one 3 UniSee Boat×2 in the crisis room, another of 2×2 in meetings and a third party, the largest, from 28×3, in the main surveillance room.

The main one has more than 30 meters wide, which is slightly larger than a seven-storey building placed on its side and is considered the largest monitoring video wall of its kind in Latin America.

Queretaro operators need to make quick decisions based on the information they receive. So, the visualization platform of the C4 center had to facilitate the collaboration and the visualization of the videos of the surveillance cameras in any videowall of the facilities.

Operators also needed to be able to share content between the different rooms and video walls. Barco's network visualization solutions made it possible.

Camera feeds are monitored with a video management system Milestone Systems, and integrate with the management suite TransForm N (NDN-211, NSD-410 and NGS-D320) boat. Thanks to this integration, operators can monitor their video content exactly where they need it and share it securely across the organization, from the main control room to the crisis room and the meeting room, or with remote stakeholders.

Queretaro's C4 Center consolidates the city's entire security and intelligence infrastructure for surveillance analysis and responsiveness. As a trusted technology partner, Barco was able to exceed the city's expectations in terms of quality, experience and collaboration with other technology partners.

Thanks to the visual effects of the videowall, the seamless viewing experience and network viewing, the city of Querétaro has a powerful tool that increases the response capacity during any crisis. In this way, authorities can mitigate threats as soon as possible and ensure the peace of mind of their citizens and visitors.