The ERMO 482X Pro, distributed by ProdexTec in Spain and Portugal, is designed with Fuzzy Logic technology, providing an anti-collision safety solution, ideal for supporting air traffic control on the ground. 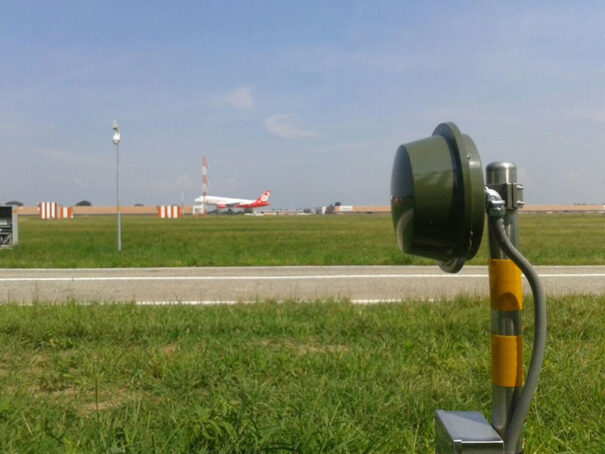 From 1974, the Italian company CIAS manufactures microwave barriers specially designed for safety uses. However, ERMO 482X Pro series, with fuzzy logic algorithms (Fuzzy Logic) it is also used to manage taxiways and their links (roads at airports to access the main runways), as well as track raids that automate exit lights after a GO command on a stop bar.

This technology, both K-band and X-band models, have proven to be the most reliable for immunity from radio frequency interference that occurs in the vicinity of airport runways.

This review is also shared by ADR (Aeroporti di Roma) who had a direct experience at the Leonardo da Vinci-Fiumicino where more than 70 Ermo 482x Pro barriers to support air traffic control.

The result they highlighted is a reduction of up to 95% alarms not generated by the actual presence of aircraft on the runways, compared to the standard analog technologies previously used, without compromising the reliability of intrusion sensors.

At airports there are different sources of electromagnetic interference, some of them of great intensity. First of all, ground radar, then the instrument landing system and continuing with radio communication between aircraft and ground control, among others.

The deployment of CIAS microwave barriers, brand distributed in Spain and Portugal by ProdexTec, it's a very suitable solution for these situations.

The most requested solution is the ERMO 482X series 3.0 Pro, equipped with an antenna 24 GHz capable of generating a very consistent microwave beam managed by sophisticated signal analysis based on the rules of fuzzy logic (Fuzzy Logic).

The result is that it allows to increase the ability to detect the actual presence of aircraft or other vehicles on the runways, almost entirely eliminating the effect of existing interference and consequent disturbances due to false detections.

Many Italian and international airports are already equipped with technology from the Italian company CIAS or are about to adopt them to increase not only perimeter protection, but also anti-collision safety to support air traffic control on the ground.