This microwave column of the Italian brand CIAS, distributed in Iberia ProdexTec, guarantees the degree 4 complies with European standards EN50131.1. 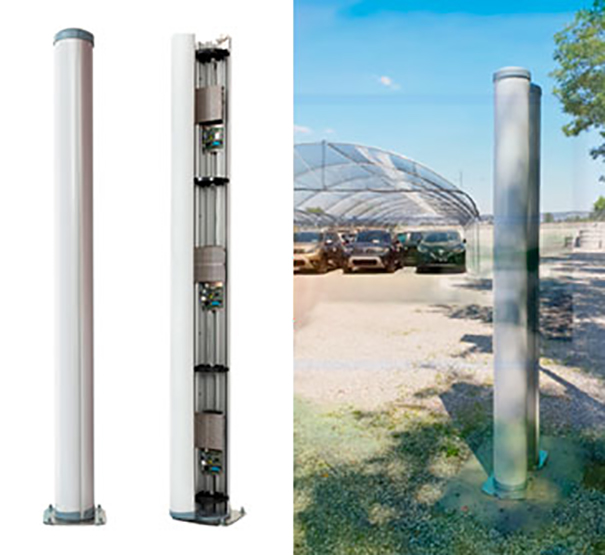 The Micro-Ray microwave column, de CIAS Elettronica, brand that distributes ProdexTec in Spain and Portugal, has been the solution chosen to ensure maximum safety in the expansion of the Renault-Dacia car park in Monza (Italy).

Relocating cars to non-interconnected areas, the value of assets and the time required to react to potential intrusions, demanded a degree solution 4 security, complying with European standard EN50131.1.

CIAS Micro-Ray Column Meets These Requirements, And, In addition, accurately detects at a distance of up to 100 meters and is not affected by the light of the headlights of the vehicles.

The combination of microwave technology with linear infrared technology, gives Micro-Ray total immunity from fog, the sun and atmospheric changes, operating temperature between -35oC and 65oC.

Its perimeter sensing uses special antennas 24 GHz and is based on fuzzy digital logic (Fuzzy-Logic) to get better detection without false alarms. Each column allows the assembly of up to four antennas with independent rays and can be configured in different scenarios offering application flexibility without interference.

These antennas create very narrow beams that cause the alarm to jump due to disruption and not by disturbances generated by any movement within the area, minimizing false alarms.

The installation at the car park was deployed on a perimeter of some 350 meters in which four pairs of Micro-Ray microwave columns have been installed 2 meters high. Since microwaves, by its nature, don't require heaters, the absorption of each column is about 200 mA and, that's why, it has been possible to use only a physical cable to receive alarms and power.

A series of cameras, an intruder detection unit, GSM connections, plate readers and radio links, complete the system that was remotely monitored.

The ability to calibrate the system without the need for software, facilitated the programming process, that has been done using the built-in alignment tool and settings, depending on the scenario, adapted to the situation.

CIAS Micro-Ray microwave column was awarded last year with the Award for Best Innovation Product Detektor International Award 2019 And, Recently, has won the award for the best perimeter protection product from GIT Security 2021,