The pitch features panoramic PanoVu cameras 24 MP and NVR from this manufacturer at Amsterdam Arena and ten more club fields. 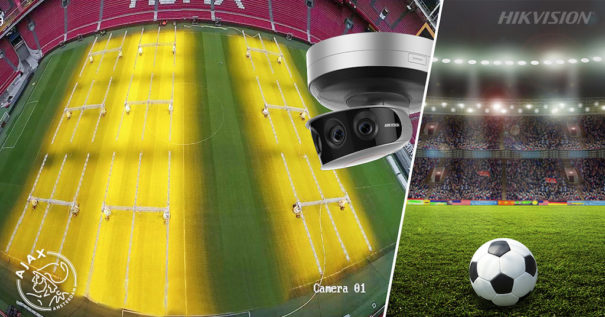 As an official sponsor of the professional football club Ajax Amsterdam, Hikvision has been the company responsible for deploying a modern video surveillance and monitoring system, with video analysis technology, both at the headquarters of this team - the stadium Amsterdam Arena – as in the ten training camps that the club has, known as Sport complex of the future.

One of the Dutch football club's needs for the video surveillance solution was for teams to provide a 180-degree view that fully covered the pitch, as well as being flexible enough on the move and fast enough to track and monitor players during sporting matches and even training.

Hikvision technology has met these needs with the installation of PanoVu panoramic cameras 24 Mp (model 6A64FWD), both at the ten training camps and at Amsterdam Arena , who have strategically positioned themselves to cover the entire playing field.

These devices incorporate four lenses, of 4 megapixels each, to provide a total of 24 Mp, with a crisp, high-resolution image, and with a ratio of 30 fps for maximum accuracy and detail.

The image offered for this project by the PanoVu camera 24 MP is set to be slightly tilted, so that software specializing in analytics GameOn And Tno can unify the images captured by the device's four lenses to provide a complete view of the detailed and accurate field. In addition, the first features a virtual PTZ feature that allows the system to zoom in on specific players and follow them during their actions on the pitch.

These networked security devices are management with Hikvision 96128NI-I NVRs, installed at both the Amsterdam Arena and the ten training camps. This digital recording system is very flexible, so operators can easily save and store images and recover seamlessly, both to clarify plays and to form and correct team errors.