The new infrastructure of the city has been renovated with more than 200 True 4K WV-SPV781L cameras and close to 100 Speed Dome. 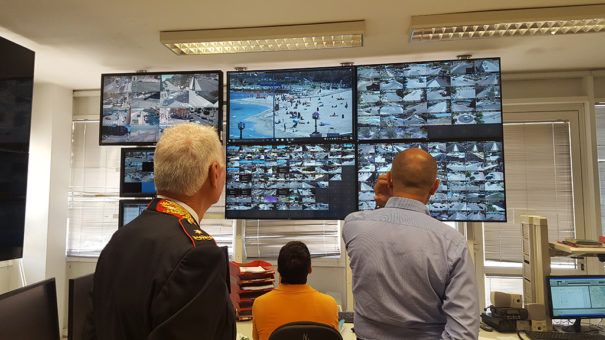 Bari is the sixth Italian metropolitan area with close to 1,3 millions of inhabitants. This city has implemented a video surveillance system based on the cameras 4K WV-SPV781L of Panasonic.

"Urban security is a complex and common theme for all metropolises. Equipping the city with an advanced video surveillance system like the one we have chosen means having images of the highest quality, which are very useful in cases of illegal acts", comments Antonio Decaro, responsible for IT Infrastructure of the Municipal Police and president of ANCI (Associazione Nazionale dei Comuni Italiani – National Association of Italian Municipalities).

The starting point of this video surveillance project has been the renovation of the existing analog television closed circuit system in order to overcome the problems related to the quality of the images and the way to connect with the operations room of the Municipal Police.

The company Electronic's Time has been responsible for providing the technology while OnLiCom, that has been in charge of the installation.

“The city of Bari expressed the need for a CCTV system capable of dealing with a wide variety of urban environments, who was able to take care of normal crime prevention, street safety, the detection of the abandonment of waste and pets, recognition of license plates and many other related services", comments Generoso Trisciuzzi, Area Sales Manager and Technical Engineer of Electronic's Time.

In this way, this video surveillance infrastructure has been equipped with a 450 Panasonic cameras, Including 200 bullet-type cameras (bullet) and about a hundred Speed Dome.

Moreover, to avoid occupying a large bandwidth with high-resolution images, a redundant system has been arranged that transmits to the operations center the video streams in the medium/high quality to view and record on central servers. simultaneously, registers in 4K on servers located at display points within armored enclosures (CED type), ensuring double recording/viewing.

Thanks to the intervention of ETT ElettroTecnica Tranese, OnLiCom subsidiary, a hardware system was also created for the anti-crisis room, that interacts directly with the Municipal Police through fiber optics (ADSL 512 KB to 40 Mb) and HiperLAN radio bridges (around 130 between BTS and CPE) for live image streaming.

As for the connectivity of the operating room, a symmetrical fiber optic line of 600 Mbps, configuring an MPLS private network with two redundant servers and two NAS storage servers to keep records up to 7 Days.

The entire system is accessible from the outside, through smartphones or tablets provided to the police, operating on a private MPLS network. Police can monitor cameras remotely, actively interact and transmit to the operations center images taken by the cameras.

The network infrastructure, interconnections between the main axis and the server, Records, screens and files on storage devices are managed by the VMS platform MIlestone XProtect Corporate, monitoring, records and stores videos in native resolution, locally and remotely, thanks to redundant recording systems.

This innovative configuration ensures that native resolution images are displayed when needed without the need for a high-performance local network.

A feature of 4K CCTV systems is the ability to provide optimal image quality without compromising large bandwidths.

“We have created a system that could assist the police in their supervisory and surveillance functions., providing valuable support for monitoring and intervention in case of emergencies or illegal acts", clarifies Giambattista Quaranta, director of the City Police.

Rain wash coating allows high visibility in rain environments and ensures the evacuation of water from the surface of the chamber without forming drops so as not to disperse light and hinder visibility.