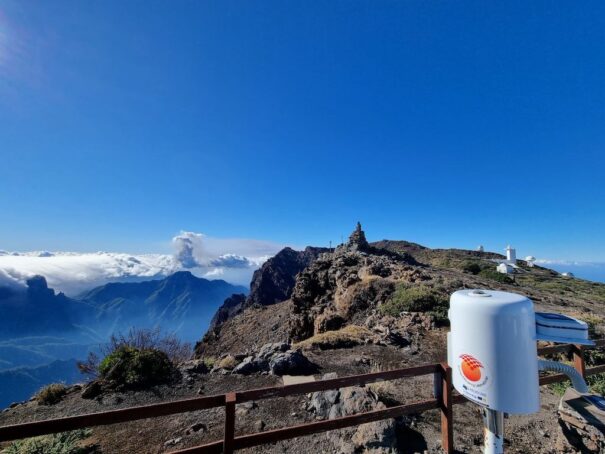 Near 1.500 hours of live broadcast, with more than 400.000 Views, have allowed to know the evolution of the Cumbre Vieja volcano in La Palma through the manufacturer's cameras Mobotix.

A few weeks ago the activity of the volcano Cumbre Vieja of the Canary Island of La Palma was reduced to practically disappear. With this inactivity they end up near 1.500 broadcast hours live -and close to 400.000 Views– in which, for three months, Mobotix's S16 cameras, installed on the MiNiO driver (Meteo Nano Observatory) of the project Interreg EELabs, have relayed their evolution from the highest point of the island, The Roque de los Muchachos Observatory, in Garafía.

Thanks to the information provided by this camera model since the beginning of the eruption, the past 19 September, The National Geographic Institute (IGN) and the Volcanological Institute of the Canary Islands (Involcan) were able to estimate the height of the gas column and, therefore, its approximate flow.

This is just one of more than thirty cameras Mobotix installed in the Observatories of the Canary Islands, which are used to observe the weather in the summits of Tenerife and La Palma, as well as in scientific experiments, as in the case of devices installed in the minio drivers of the eelabs project, which aim to assess the impact of light pollution on the natural ecosystems of Macaronesia.

"The fact that our solutions are so flexible and modular- Says Alfredo Gutierrez, iberia country manager & Mobotix's Italy- allows them to adapt in such a way that each project can see their needs covered. That has been the case with the MinNiO, a great benchmark of success. That it now serves to help calibrate the impact of the volcano of La Palma has been very lucky".

MiNiOs have a Camera all sky S16, with a 180° vision, and another M16. The purposes of these Mobotix devices are cloud detection and environmental imaging, Respectively.

LThe MiNiOs have in this project with a raspberry that provides Internet service to both the cameras and the photometers of the project, that measure the natural darkness of the night in hard-to-reach places.

Currently there are six MiNiOs of the Interreg EELabs project installed in Tenerife, La Palma and Gran Canaria that receive the data of the darkness of the sky of these islands and whose cameras can be consulted through the portal of sky-live.tv. New MiNiO devices will be installed in Madeira and Corvo in the coming months (Azores, Portugal), which will make it possible to assess how light pollution affects seabirds.

"We have been working with Mobotix teams for a long time.. Among other advantages, it should be noted that they are very resistant to the most extreme conditions, which allows us to maintain constant monitoring of the skies from our observatories", Designates Miquel Serra-Ricart, administrator of the Teide Observatory, of the Institute of Astrophysics of the Canary Islands (IAC).