This Dutch company's 4EVAC series public address and voice alarm equipment is now available for commercialization in the Spanish market. 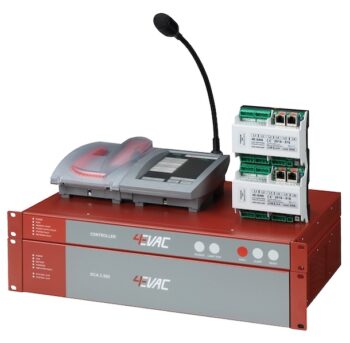 The Spanish manufacturer Optimus and the Dutch company Hacousto Protect have reached an agreement to distribute the public address and voice alarm equipment of the latter's 4Evac series, EN certificates 54.

Hacousto Protect 4Evac consists of two ranges: the compact 'all-in-one' C500 and the scalable Impact, both combinable and fully compatible through a global network of up to 254 nodes that allow control of 1.400 speaker lines.

The C500 is an all-in-one voice alarm and evacuation system, with the simplicity of an independent team and the benefits of a network topology to link and extend the system.

Each C500 unit manages six audio streams, which can be output simultaneously on the six speaker lines connected to the power stages.

For global notices, the C500 system is networked, through a redundant loop, with two audio channels and a serial data channel (RS485). Everything is supplied already connected and configured in an easy-to-assemble wall cabinet.

For its part, Impact is a scalable voice evacuation and alarm system based on a minimum number of elements: the controller, power stages and zone selectors.

These equipments are mounted in rack cabinets, taking up minimal space thanks to the small number of elements and the effectiveness of class D stages, only 2u high.

Both systems have in common their ease of assembly, installation and configuration. In the case of C500, electronic components are easily inserted and removed from the cabinet, and a simple wall mount simplifies its placement, that can be done by a single person.

In the case of Impact, the three elements that make it easier to set up the public address and voice alarm system: once the power and the necessary speaker areas are known, the number of units of each equipment is determined.

Both C500 and Impact are configured using the general 4EVAC Manager software, included in all teams, it provides an overview of the public address and voice alarm system and makes any setup easy thanks to a very intuitive user interface.

This interface allows quick download and loading of system settings, error detection to speed up equipment start-up, updating firmware and configuring over the network for all devices and the ability to quickly update by changing SD cards on computers, no computer needed.

With the 4Evac range, Optimus completes the offer of certified equipment by joining Compact, a scalable system, modular and linkable through the corporate data network, suitable in both centralized and distributed facilities.

With C500, Impact and Compact meet the needs of any type of installation: Hotels, Hospitals, Shops, Business, Transport, Industry, as they point out from the company.