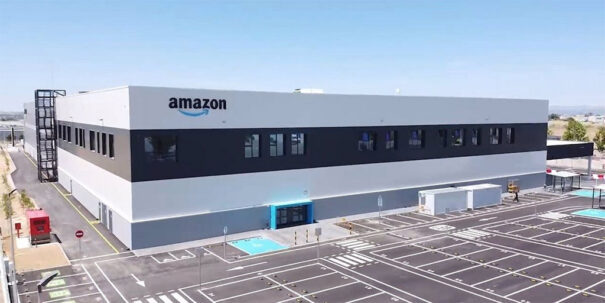 The entrances of the large warehouses of the e-commerce company Amazon are controlled with solutions Aiphone AX, while in smaller installations the JP system is used.

The American e-commerce multinational Amazon, is in full expansion phase inaugurating logistics centers throughout the territory, usually in well-connected spaces that reduce delivery times. These have to be well protected and have opted for the Aiphone system, brand that distributes Optimus, to control access.

In the large warehouses with many entrances to manage (Parking, van traffic…) access is controlled with the equipment of the AX system of Aiphone, specifically with vandal-free metal call stations with audio and video and flush mounting (AX-DVF) or on the surface (AX-DV), connected to the switching units AX-084C And AX-248C.

Communications are governed from the control centers AX-8MV, with color display and hands-free communication with call stations.

It is a system of great capacity that allows the government of up to 120 call points from 8 checkpoints, with up to radial connection 300 meters away with Cat5E cable, suitable to cover the great distances in this type of logistics warehouses.

In smaller installations, the JP system of Aiphone, allowing control of up to four entrances from eight checkpoints. In the accesses the surface audio/video plate has been placed JP-DV, Metal, with zoom and pan-tilt movement.

The control is done from a monitor with color touch screen of 7 inches that allows hands-free or private communication via the telephone headset, desktop-installed with stand MCW-SA. Although the system supports high distances of up to 100 Meters, sometimes it is necessary to extend this distance to the 300 meters with the adapter JPW-BA.

Audio/video security system with up to capacity up to 120 entry stations and 8 checkpoints, all wired in CAT5e.

Input stations can be audio only or audio and video, in various formats, included in vandal and weatherproof. The checkpoint receives the calls, that may be normal or priority, establishes communication selectively, can talk to other positions, controls the opening of doors, monitors both audio and video (via a 3.5 TFT LCD display″)…

Monitors monitor, communicate and open the door of the accesses, have selective intercom between them and a set of advanced features such as the induction loop, hands-free or private communication via headset, zoom, call memory, internal transfer, emergency call…

The JP series adds other features such as forwarding calls to a smartphone (via interface), audio output for recording or remote CCTV camera connection.