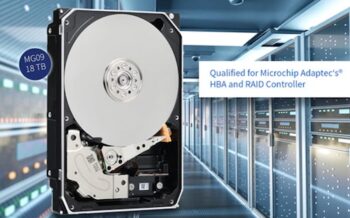 Toshiba Electronics Europe has announced that compatibility testing of its new 3.5" hard drive and business capability 18 Tb -The MG09 series-, and Microchip storage adapters have been successfully completed.

this rating guarantees the operation of these hard drives (HDD) with all AdaptecÒ bus host adapters (Hba) and Redundant Array of Independent Disk (raid) of Microchip.

these adapters connect the enterprise hard disks to the server, enabling the construction of advanced network architectures. Seamless interaction ensures the functionality and operational stability of enterprise and cloud storage systems.

Rainer KaesE, senior head of storage product business development at Toshiba Electronics Europe, notes that "we are very pleased that our long cooperation with Microchip allows the qualification of the MG09 generation with its Smart Storage adapters shortly after we launched it on the market. Companies using Adaptec adapters can install these 18TB business drives with proven interoperability..

Mg09 series compatibility confirmation concerns the SAS 12GB/s version of the MG09SCA18TE/A model and the SATA 6GB/s of the MG09ACA18TE/A.

The tests have been carried out with the new models of HBA and RAID tri-mode PCIe Gen 4 24G SAS/SATA/NVMe, the HBA series 1100 and SmartRAID 3100, as well as with its predecessor Raid Series 8. They have not only tested the basic functionality and compatibility of the interfaces, but hot-plug tests have been performed, power on and restart.

Long-term stability has also been confirmed by a long-term test. As a result, MG09 hard drives have been qualified to enter the compatibility list of Microchip.

This proposed solutions, adds Bennet, “with demonstrated interoperability with the components of this ecosystem, such as Toshiba's SAS and SATA HDDs, is vital to ensure rapid and reliable integration and deployment of next-generation storage solutions.".

The MG09 series, which was recently introduced to the market, is based on Toshiba's third-generation design of nine helium-sealed discs and incorporates revolutionary microwave-assisted magnetic recording and flow control technology (FC-MAMR).

With a 12,5% more capacity than previous models of 16 Tb, the disks of 18 MG09 series TB are compatible with the widest range of applications and operating systems so far.