A single camera in this series replaces up to twenty-four devices and saves more than 50% operating and infrastructure costs, based on the manufacturer's proven data. 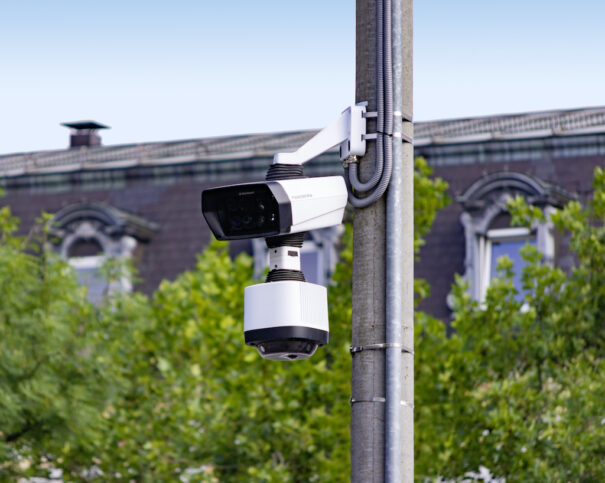 With the motto of 'Making Things Easier', multifocal sensor systems Panomera from the manufacturer of video technology Dallmeier ensured the highest image quality and analysis data, with a minimum number of cameras. for ten years now.

The latest generation of the Panomera S series features a completely new design, in addition to technological innovations such as the concept of assembly by a single operator, non-contact cleaning of the front glass and, especially, superior capabilities in video analytics.

Panomera multifocal sensor systems differ from other cameras in that they combine the overview with an unlimited number of high-resolution detail zoom.

These detail zooms can be easily opened with a mouse click on the overall image, as if they were 'virtual' PTZ cameras, both live and in the recording. This is achieved through the use of up to eight sensors with different focal lengths in a single system (Patented). In this way, it is possible to capture more 'surface by camera'.

The result translates, according to the manufacturer, not only in a considerable improvement in ease of operation and overview, depending on the field of application, but in savings of more than 50% operating and infrastructure costs.

In addition to the advantages in image capture and handling, Panomera's latest generation stands out for its analysis capabilities, combining image quality that can be precisely defined (data quality) with advanced analysis technology.

In traditional camera technologies, image resolution and, with it, analysis performance, always decreases towards the background of the image.

On the contrary, Panomera S series cameras capture a very large surface with minimal resolution, defined exactly during planning, allowing them to analyze complex contexts with the same data quality even in extremely large areas.

If an application requires, For example, a minimum resolution density of 62,5 pixels per meter, according to DIN EN 62676-4, you can cover more than 50.000 m2 with a single camera system.

This would be more than enough for the usual object classifications. Even with the highest density of DIN resolution –250 px/m for the identification of unknown persons admissible in court–, a system still encompasses up to 3.100 m2.

To do this, each of the eight sensors of a Panomera is equipped with a state-of-the-art SoC analysis unit with artificial intelligence (The) Integrated, so that the analysis can run directly on the camera (video analysis edge), whether it's counting people or others. Users can manage Panomera cameras with the video management system (Vms) Hemisphere SeMSy or any other VMS system that supports Onvif.

Installation and adjustment only with an Allen key

Dallmeier engineers have placed particular emphasis on functional design. Like this, Mountera mounting concept offers huge time savings and fewer errors during deployment: a special quick-closing system Quick-Lockallows a safe installation of the systems by a single technician.

The different wall mount brackets, roof or mast are also perfectly compatible with each other; can even be combined with 180 And 360 degrees from the Panomera W series of cameras.

The manufacturer has also optimized the very tasks of unwrapping and installing: a disposable handle already mounted on the camera inside its packaging, along with the foam that remains as 'bubble protector', reduce driving effort.

The camera is removed from the packaging in a single step and can be transported and supported without damage. In addition, the size of all Allen keys needed for installation and adjustment is the same, so only a single key size is required.

The new generation of Dallmeier's Panomera cameras also meets the demands of architecture and optical integration through a design language applied uniformly across individual models.

Along with the dynamic look, special attention has been paid to its functions, including passive cooling, which makes additional cooling unnecessary for temperatures up to 60 degrees Celsius.

Added to this, available as an option, a system called Air Blast that uses compressed air to clean the front glass of dust, non-contact water and insects and, therefore, wear-free.

Active and visible data protection from afar takes care of Privacy Shield, a remotely controllable curtain with which police or private companies can temporarily disable, with a few mouse clicks, Panomera systems in a clearly visible way, For example, during demonstrations or strikes.

"For ten years, our Panomera customers have demonstrated that solutions with 'Made in Germany' technology can be made that give exceptional results when it comes to achieving safety goals while, At the same time, meet the most stringent data protection and data security requirements", point from Dallmeier.

At the same time, "Multifocal sensor technology is the smart answer to many unresolved problems because it brings accuracy and planning to video technology", adds Dieter Dallmeier, founder and CEO of Dallmeier electronic (pictured).

Panomera systems, "not only do they improve the management and achievement of security objectives in video observation and surveillance, but, especially, also provide superior data quality for increasingly important video analysis. The fact that these solutions can also be implemented at significantly lower total costs than other comparable technologies, surprises many of our customers over and over again", adds Dallmeier CEO.

To know in detail the advantages of the Panomera S series, the company will hold a webinar, twenty minutes long, the next 5 November, at 16:30h CET.