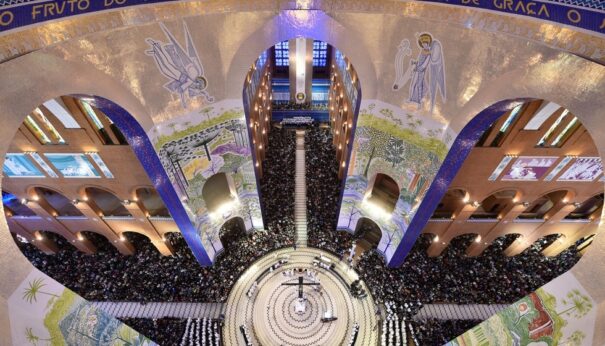 The second largest Catholic church in the world has installed new IP cameras of Axis Communications and has unified its video management systems (Vms) with XProtect from Milestone Systems to improve efficiency and safety throughout the enclosure.

The Cathedral Basilica of Our Lady Aparecida, located in the Brazilian city of São Paulo and with the capacity to receive 30.000 people inside, is the largest Catholic facility in size after St. Peter's Basilica, in Vatican City.

For more than a decade, to protect and ensure the safety of parishioners and visitors, as well as the enclosure in general, video surveillance systems have been used, although not with the desired efficiency, as CCTV was based on two different video management systems and two separate locations.

With a total constructed area of the basilica of 23.000 m2, so that the enclosure, including the temple, can accommodate some 75.000 People, since it has several areas such as chapels, a museum, a space for music education, a shopping mall, a medical clinic, a visitor support area, restaurants and a huge parking lot for the buses and cars that arrive every day.

Additionally, in this space special events are held attended by thousands of people, such as pilgrimage festivals, the visits of the Pope and other authorities, for which it has the work of two hundred agents, who together with the military police, strengthen security.

With these dimensions, its managers have wanted not only to improve the safety of the entire installation but also, Mainly, your operational efficiency with the VMS convergence on a single platform, enabling monitoring from a single command center and proactive response from security officers.

For this project, the experience of the Brazilian integrator has been counted on SilliS Security Intelligence -partner in the category Gold of Axis Communications (since the basilica already had devices from this manufacturer)-, to unify existing systems with the software platform Xprotect of Milestone Systems, in the sanctuary's data control center.

To improve security agent workflows and response, SilliS installed Axis Optimizer, which allows you to control the functions and settings of the cameras directly from the control panel. In addition, in order to assist in the sanctuary's online programming and live streaming of its services, has opted for Streaming Assistant, also from this manufacturer, making it easy for AXIS cameras with HDTV quality to function as streaming devices, an added value since the pandemic, at which time the webcasting of the Masses began.

SilliS Security Intelligence has defined and deployed a system of nearly four hundred Axis video cameras throughout the venue, in addition to installing a video wall in the command center to offer security personnel real-time tracking and access to all the cameras of the basilica. A secondary command centre has also been set up within the Rainha hotel, located in the shopping complex, staffed 24/7 for additional surveillance.

Luisa Viera, IT Director of the Basilica of Our Lady Aparecida, pointed out that the centralization of the VMS has been a great improvement to concentrate the supervision of the entire complex in one place, as the security team can now manage all Axis cameras remotely from the Milestone control panel, perform tasks such as autofocus, activating surveillance paths and even accessing image metadata for intelligent search of people and objects.

Another advantage is that access control has been improved in the facilities of the enclosure that relies more on the cameras to monitor the established health security protocols.