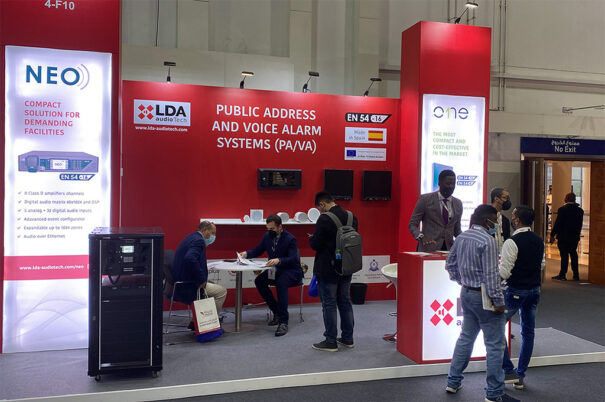 During your attendance at Intersect 2022, LDA Audio Tech presented its novelties, as the native audio converter AES67 level 3 NEXUS, the acsi protocol update for multi-island LDA systems, the expansion of the range of EN certified speakers 54-24 and the new version of the SIME Control management platform.

Mid-January, Dubai became the meeting city for the security sector and fire evacuation and did so under the umbrella of the celebration of Intersect 2022. An appointment he went to LDA Audio Tech to offer a preview of the novelties that can be seen this year in the market.

The balance of attendance at this professional fair is cataloged by the company as very positive, thanks to the business opportunities identified and the strengthening of trade relations in the Middle East, an area with a large presence of public address and voice evacuation systems manufactured by the brand.

Although the attendance of registered public was somewhat lower than in 2019, and the number of pavilions decreased from 7 To 4 compared to the previous edition, the overall environment has been positive and recovering.

Among the novelties that could be seen at the LDA Audio Tech stand is the native audio converter AES67 level 3 NEXUS, the acsi protocol update for multi-island LDA systems, the expansion of the range of certified speakers in 54-24 and the new version of the management platform SIME Control.

Moreover, LDA Audio Tech also carried out live demonstrations of the two ranges of EN54 certified systems manufactured by the brand in Spain.: NEO And ONE. With the presence of rack and wall-mounted equipment, connected to fire panels and other accessories, visitors were able to check the public address and voice alarm functions provided by these products.

The fair offered the opportunity to present the Qatari company Cantech with the LDA award for the Best Integrator in the Middle East of 2021, picked up by its Sales Manager Saheem Zia. On that occasion, the LDA team also met in Qatar together with other partners of the same origin., as Brothers Qatar.

Intersec has meant the return of LDA Audio Tech to the international level, after the obligatory break in face-to-face meetings due to the coronavirus pandemic. Behind is, the company will also attend the security event in Madrid, Sicur, to be held on the 22 To 25 February in Ifema. And, Later, of the 12 To 15 April, will go to Moscow to the International Fair of Safety and Fire Protection, Securika.