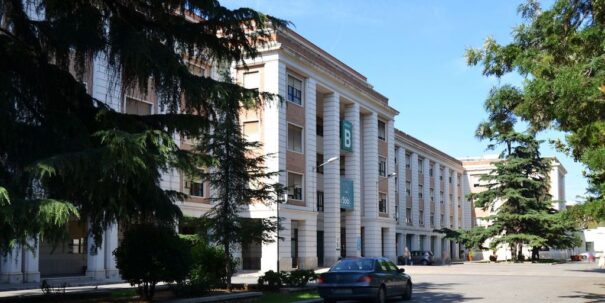 AX Series AV Safety and Intercom Models, NIM and IX of Aiphone, distributed by Optimus, facilitate the signaling and patient-nurse communication of the center.

The General University Hospital of Valencia, located in the L'Olivereta district of this city and built from the old Hospice of Fray Juan Gilaberto Jofré, founded in the fifteenth century, is one of the four reference centers of the Valencian capital.

Patient systems have been installed in its hospitalization plants- nurse of the NIM Series of Aiphone, with control centers of up to forty rooms, así como un completo conjunto de opciones para equiparlas, as the hands-free intercom NI-BA, the bathroom handle NIR-7HW and the call signal lamp NIR-4.

The versatility of the system allows, For example, install the recessed intercom on the ceiling, with the units NI-LB (speaker) And NI-SB (microphone), ensuring the perfect reception and transmission of the conversation between patient and healthcare personnel.

This system of signalling and intercom patient-nurse, developed for application in hospitals, clinics and residences, allows you to make the call from the bathroom or room, and signals the call both in the central and in the hallway lamp.

As a result,, reliable communication is facilitated both in difficult conditions (handles up to ten simultaneous calls) as in particularly noisy environments (for its sound power), and adds door opening function for control access and ensure security.

The Aiphone NIM Series, which distributes in the Spanish market Optimus, also has a general call, to groups and call log (which can be consulted from a computer). The exchanges are equipped with a telephone headset, in addition to the loud voice communication system and push button to talk, with twenty to forty keys with Led for communication control.