World Heritage Site, the mausoleum of China's first emperor, protected by these clay warriors, has powerful fail-safe detectors, to alert to the inlet of thieves and possible damage to the sculptures. 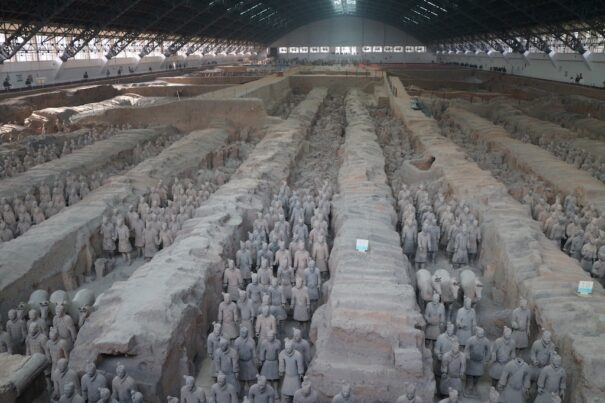 With an intruder detection system that had become obsolete, one of the priorities has been to update it and address several key security challenges. One of them was, until the arrival of the pandemic, was to respond to the high volume of thousands of visitors a day with a fast alarm system, fail-safe, if the exposed elements are in danger.

In addition to the constant risk of potential thieves trying to steal exposed items, the biggest threat comes from tourists, those who drop mobile phones and cameras into the pits, limited areas and possible damage caused by.

Another challenge was that the new solution had to work in extreme conditions, since the pits, which house several thousand statues of clay warriors, contain large amounts of dust that can impede the work of the detectors. Finally,, the system had to be discreet, without interfering in the experience of observing warriors and statues of horses on a natural scale.

With these challenges, Bosch experts developed a combination of several hundred intrusion detectors in the 16.300 m2 of the museum area. In order to achieve rapid detection of security failures, wall-mounted detectors were installed along the pits, which was complemented by those installed on the ceiling, above the areas where visitors pass and those that are open.

The detectors, integrated into the manufacturer's G Series control panels, operate with microwave and infrared technologies, improved by First Step processing algorithms (Fsp) to detect changes in infrared energy when a person exceeds a predefined safety limit inside the museum and along the perimeter.

By eliminating false alarms due to dust and other environmental interference, pit detectors use an infrared pyroelectric sensor (Pir) and adaptive microwave noise processing technology.

One differential feature is that sensors provide accurate intrusion detection, even if they are mounted on the vaulted, raised roof of the Terracotta Warriors Museum. Specifically,, the roof is at 4,8 m height, which exceeds the limits of standard ceiling detectors by more than 2 M.

In the event of an intrusion attempt, Bosch's G Series control panels trigger an alarm in the museum's control room in just two seconds. In addition to the exact location of the detector, the security team receives real-time images of the scene from a surveillance camera, thanks to the integration of a third-party video security platform, for a quick and effective response.

Integrated security system also responds to another key requirement for museum operators: considering that a large part of the exhibited pieces are stored elsewhere when needed, who in turn must be safe from thieves, Bosch detectors protect these storage facilities .

This use of detectors not only saves costs on surveillance personnel for these spaces, who are protected from intrusion and damage, but visitors enjoy a personal experience when looking at ancient objects without any fences or barriers that limit their journey.