With a capacity for more than 60.000 Spectators, the Gazprom Arena required a high-performance system, that would cover the whole environment, accesses, the spaces under the grandstands and the grandstands themselves. Panomera cameras were the solution. 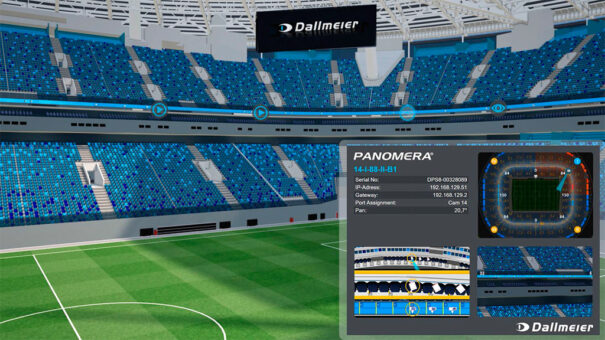 The Gazprom Arena is the home office of the Russian football club Zenit st. Petersburg. It was one of the host stadiums of the World Cup 2018 and so will the Euro 2021 and where next year's Champions League final is held. In addition, have to comply with FIFA's strict security regulations, UEFA and ESSMA.

That's why, when they had to choose the video surveillance system, Zenit managers opted for a solution from the German manufacturer Dallmeier. With its patented multifocal sensor system Panomera, ensures the safety of many stadiums around the world.

The goal of one of the largest videosecurity projects yet in a football stadium, was the coverage of the entire stadium environment, accesses, the spaces under the grandstands and the grandstands themselves. In the stadium, with a capacity of more than 60.000 Spectators, a high-performance system capable of adapting quickly and flexibly to changing needs during project development had to be implemented.

The most demanding requirement at times proved to be the acquisition at all times of one hundred percent of all grandstand areas to ensure in this way, under any circumstances, unequivocal identification of potential offenders.

To get it, Russia's Ministry of the Interior set two key requirements for the video surveillance system. First of all, had to capture the entire grandstand area with a minimum resolution density of 250 pixels per meter (px/m). Which would match the performance criterion defined for the identification of unknown persons in DIN EN 62676-4, globally valid for such solutions.

Secondly, a lower frame rate than 25 frames per second (Fps). The reason for this is that, usually, only the combination of the minimum resolution density required and a fluid representation of the event, ensures its admissibility in court as undeniable evidence.

To meet these demands, security managers invited numerous manufacturers to present their solutions at Zenit's then-local stadium (Petrovski Stadium) to find the right solution for the Gazprom Arena. A Dallmeier system has been in operation since 2012 And, following the evaluation of all proposals, it was chosen to continue with the same manufacturer.

Compared to conventional camera technologies such as megapixel or PTZ, Dallmeier's Panomera multifocal sensor system can guarantee even the coverage of larger surfaces, with the minimum resolution density and image rate required.

Panomera systems capture everything that's happening, with a full resolution, and allow high-resolution zooms, both live and on record, and by several operators at the same time. In this way, stadium operators can follow and reconstruct relevant events in detail, at the time and also at a posteriori.

Another advantage of the Dallmeier stadium solution was the innovative approach to 3D planning, which created a digital reproduction of the Gazprom Arena. This makes it easy to meet the requirement to get even in the last corner a minimum of 250 px/m. Color coding in 3D simulation allows you to say exactly where the value is reached and where it would be necessary to retouch by relocating a camera or replacing it with another model.

Another great advantage of this planning approach is the efficiency of the solution. Zenit st. Petersburg is enough to provide safety in the grandstands much less than a hundred Panomera chambers, covering all areas with 250 px/m and 25 fps at least. A workaround would have required a greater number of conventional single-sensor cameras. In addition to higher infrastructure costs (Posts, Cables, Etc.), would have generated a barrage of images that were difficult for video system operators.

Another added value of Dallmeier's 3D planning is the automatic creation of so-called 'CamCards', accurate configuration documents for each of the cameras. With this information, the installer knows exactly where to assemble which equipment, at what height and at what angle. The big advantage is, especially, apart from saving time, planning security. It can be predicted with high precision how long and work the installation of the entire solution will take, because the approach minimizes unpredictable factors.

Today, together with panomera systems, more than a thousand single-sensor cameras are installed in the Gazprom Arena, securing all areas of the stadium. Given the high number of cameras, the total storage capacity of the video security system is more than six petabytes (equivalent to some 6.000 Tb). Dallmeier's high-performance recording appliances are also used for processing. Authorized staff from different departments and stakeholders can access the system through 80 workstations.

Dallmeier's vidoevigilance system has already demonstrated its performance capabilities and operational reliability in the Gazprom Arena on multiple occasions.

"We were very pleased that the security managers of Zenit St. Petersburg trusted Dallmeier for their headquarters as well, the Gazprom Arena. This success in the largest stadium project carried out by us shows once again that Dallmeier's comprehensive approach to security and solution, led by Panomera's patented technology and our project and advisory services, offers great added value to our customers", explains Karlheinz Biersack, Director of Sales for Eastern Europe/RUS/GUS at Dallmeier.

The patented Panomera multifocal sensor systems capture in the Gazprom Arena each seat in the grandstands with a minimum resolution density of 250 pixels per meter (px/m) And 25 frames per second.

As part of innovative 3D planning, Dallmeier was able to model the stadium in detail and determine exactly where, what camera model and how it should be installed to meet zenit's security requirements in St. Petersburg. "CamCards" enable accurate and rapid implementation.