The security device of the Andalusian capital during Easter 2019 counts for the second year in a row with Bosch Security solutions, along with Axion's, Protelsur and Sitelen Spain, as part of the Smart City project to monitor the influx of people and vehicles. 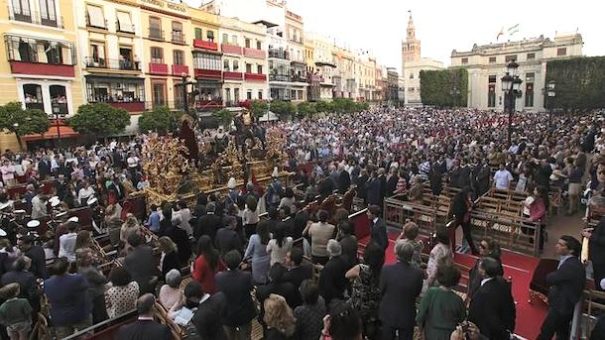 The Seville City Council has launched the Smart City project during its emblematic Holy Week, that has again this year with the technology of Bosch Security to ensure the protection of citizens and visitors, along with your partners' solutions such as Axion, Protelsur And Sitelen Spain.

As a novelty this year, the security project incorporates the so-called Intelligent Crowd Management, which uses Bosch cameras as smart sensors that offer real-time information on the influx of people, virtual capacity, detection of objects at speed and heavy vehicles in pedestrian areas.

In this sense, highlights the incorporation of intelligent noise analysis, along with detection of cars parked in emergency areas or obstructing evacuation routes to monitor the influx of people and vehicles.

In addition to Bosch technology, this comprehensive security ecosystem is completed with Axion solutions, Protelsur and Sitelén, companies linked to innovation and part of the Bosch Smart City Partners programme.

Information from Bosch cameras and parking sensors is collected by Axion's IoT platform, which is responsible for processing the counting data, alarms and occupation and send them to the infrastructure of the Sevillian consistory, responsible for managing the rest of the subsystems such as public lighting, public address or emergency messaging.

This company has developed different tools for data processing and coordinated management of the city, which are used especially when there are large events.

To achieve the greatest effectiveness in the counting of people, the cameras have been installed in height with zenith vision by the company Protelsur in different strategic points of the city, such as access to the center, the main evacuation routes and public squares. For its part, Sitelén operates as a Bosch certified technical service for the start-up and maintenance of the operation.

Bosch parking sensors have been installed in critical areas where vehicles can obstruct emergency exits or evacuation zones. Both video cameras and sensors are connected directly to the Emergency Coordination Center (POPRC) of Seville through fiber optic and 4G connections (Lte) implemented and secured IP-Sec.

Bosch solutions have been selected for this project because, among other elements, incorporate embedded video analytics, allowing cameras to be connected via 4G, WiFi or B-PLC satellite. In addition, these devices have shown their reliability in counting people and detecting occupancy degrees, so that it is possible to perform a noise analysis and generation of alarms by frequency or decibels.

Data security (Tmp) is implemented in cameras at the hardware level, have low data consumption and video streaming storage, as well as the possibility of redundant storage in the camera and in the CECOP. In addition, parking sensors have dual detection technology and are easy to install.

The high concentration of people, coupled with the architecture of the city in this area (narrow streets with many nooks and crannies) raises the risk of avalanches of people due to false alarms generated by the fall of metal elements, shouts or races of groups of people who, on many occasions, are intentional.

This has provoked in recent years situations of collective panic that have led to stampedes and crushing of people, breaking of the procession, abandonment of images and numerous material damages, in addition to generating a negative image about this event, which is a tourist attraction of the city.

That's why, the City Council of Seville has sought technological tools to know, in real time, the flows of people accessing the centre, the degree of occupation of the different sections of the route, possible agglomerations in evacuation routes, virtual capacity control, the start of races or stampedes, the detection of vehicles in pedestrian areas or incorrectly parked in evacuation zones and the analysis of critical noise.

With this information, in addition to the live viewing of the security cameras and the permanent communication with the Police, those responsible for the POPRC can send live messages to the population through public address, social media and Bluetooth beacons, as well as acting on public lighting (bringing it to its maximum intensity) or activate the intervention of the Police.

The final objective is to obtain automatically and reliably the degree of occupation of the different roads of the center, being able to know in real time how visitors and vehicles behave and in this way take preventive measures to avoid situations of risk to the population. In addition, with the statistics of affluence obtained throughout this year it will be possible to plan new actions for future editions.