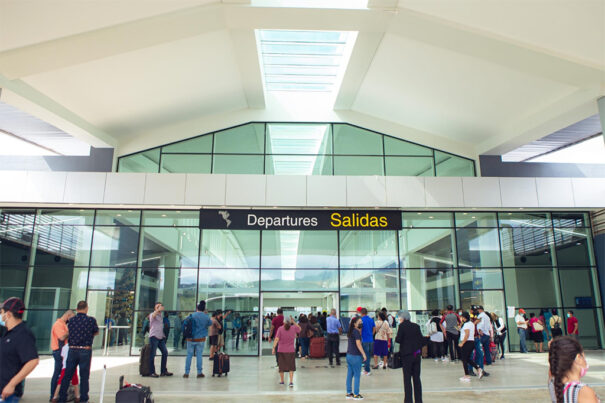 A NEO-8060 controller with twelve amplification extensions has been installed at this airfield in Honduras, fifteen ZES-22 arrays and nine MPS-8Z multi-zone microphones LDA Audio Tech for boarding gates.

The Palmerola International Airport in Honduras has opted for LDA Audio Tech for the installation of your public address system, ambient music and voice evacuation. This equipment ensures the safety of passengers in case of emergency.

This terminal opened in December 2021 as the new great aerodrome of Central America, after more than six years of works and an investment of more than 200 millions of dollars. Facilities have more than 40.000 square meters and have assumed the international operations of the old Airport of Tocontín in Tegucigalpa, serving the capital and the entire central area of the country.

This project has posed several challenges for the LDA Audio Tech team, which intensively tracked commissioning to ensure all systems and configurations were working properly prior to inauguration.

During the consulting phase, acoustic studies were carried out to understand the scope of the project, accompanied by all the prescription work carried out by the commercial department of LDA together with the installer.

A driver has been installed at the airport NEO-8060 with twelve amplification extensions spread over seven locations and interconnected via fiber optics; fifteen matrices ZES-22 for Automatic Gain Control (CAG) and the global sources of the system; and nine multi-zone microphones MPS-8Z for boarding gates, controlled by SIME.

Software-wise, at the airport the suites of SIME Control And SIME Calendar, with CAG modules for automatic gain control and SIP for IP telephony.

Palmerola has 7 flight walkways, 40 baggage counters, as many for immigration and emigration operations, as well as offices for the work of airport staff.

Next to X-ray and scanning equipment, the airport has half a thousand surveillance cameras and thermographic equipment to take the temperature. There are also check-in terminals and automatic baggage handling systems (SATE/BHS).